THE ART SECTOR WILL BE ONE OF THE SLOWEST TO RECOVER.

SMCK: What do you see as the meaning of the Greek War of Independence?

CM: Faith, Intelligence, Civilization, Diplomacy. The outcome of the Greek Revolution was the pivotal point on which Europe's whole geopolitical map tilted away from the 18th-century model of multiethnic, autocratically-ruled empires and towards the 20th-century model of the self-determination of nation-states. What made the Greek Revolution exceptional was that from the very start, it was never a matter for Greeks alone.

In the very first declaration of independence, issued by Alexandros Ypsilantis in 1821, under the rallying cry "Fight for Faith and Fatherland," the call went out to the "enlightened peoples of Europe," who, "full of gratitude for the benefits bequeathed by our Ancestors to themselves, eagerly await the liberty of the Hellenes."
The revolution ultimately succeeded after great sacrifices - and with Britain, France, and Russia fighting in the battle of Navarino - because the wisest and most far-sighted of the Greek leaders during that time saw the advantages of internationalizing their struggle.

SMCK: How should we imagine the Metalibrary project?

"Totem I", 2021. Handcrafted & altered book collection. Courtesy of a.antonopoulou.art.
CM: I was honored with an invitation to perform this ongoing international initiative at Tate Modern, London, in late 2019. An interactive, participatory ephemeral, site-specific performance, experienced by a diverse audience of approximately 10,000 people who visited the museum over the course of one week. This project is part of 'Add To My Library' #ATML, which has has been exhibited in European countries, including Greece.
The core material: favorite books, selected and added by art specialists and the general public, construct the floor Emblem of this universe. People sharing their stories read and exchange belief systems. Metalibrary explores, amongst other discourses, the ways in which the human body shifts between The Book and vice versa.

SMCK: What do you see as the meaning of the Greek War of Independence?

CM: Faith, Intelligence, Civilization, Diplomacy. The outcome of the Greek Revolution was the pivotal point on which Europe's whole geopolitical map tilted away from the 18th-century model of multiethnic, autocratically-ruled empires and towards the 20th-century model of the self-determination of nation-states. What made the Greek Revolution exceptional was that from the very start, it was never a matter for Greeks alone.

SMCK: What are the benefits of paper as an art medium?

CM: It depends whether it's an acid free paper or not! Paper is nature itself - organic woods. It begins as a blank canvas much like humans do. It grows old as we do and bears the marks of a lifelong journey. It has a memory that is indelible. Paper's characteristics are shaped by the way it has been made, which allows a unique personality to emerge.
Books are the main art medium in my practice and ongoing research that have significant cultural, historical, sociological, and conceptual connotations, i.e., the ongoing "Add To My Library'' initiative which is designed to provoke changes in the function of the material book while de-institutionalizing it in the process.
Having transcended any thematic organization and hierarchy, the unreadable, coverless books now have the potential to amalgamate into an infinite number of sculptures that yield a contemporary library or museum defying conventional categorization.

SMCK: Your Helen's Dress e-Residency last summer - curated by ZLR Betriebsimperium for Vamvakou Revival/S.Niarchos Foundation - shaped the character of "Helen, I Am The Book." Who is she and what is she to you?

CM: I was inspired by the discourses generated in this first ever e-Residency to unconsciously create an emblematic character whilst flirting with mythological symbols, and universal concepts hidden in the myth of Helen.
Helen's beauty inspired artists of all eras to represent her - often as the personification of ideal human beauty. Images of Helen start appearing in the 7th century BC. In Classical Greece, her abduction by Paris - or escape with him- was a popular motif. In medieval illustrations, this event was frequently portrayed as a seduction, whereas in Renaissance paintings it was usually depicted as a "rape."
In Rhodes we find her as Eleni Dendritis. Eleni as a local deity seems to have not only had a sacred place, but also a sacred tree, with a command written in Greek Doric to anyone who walks past (Kneel down, I am Eleni's tree). To this Dendritis, if we believe Theocritus, the virgins brought offerings and sang.

Within this context, my character is Helen Dentritis -The Tree. The book appears to her as the oracle, the voice of the woods. The universe, constructed as the temple, represented by the cross, an ephemeral architectural construction shaped with four books as a crossroads. Handmade embroideries on the floor depict my emblem of the cross patterns, both a religious symbol of martyr and a cognitive symbol of direction in life.

SMCK: What professional opportunities did you find in London?

CM: London has been a life-shaping experience: the place where I studied, worked very hard, and formulated my career as a self driven individual artist/curator and educator for more than 18 years. It has all the ingredients of a successful international art capital and many other international artists professionals who work hard to succeed within a highly demanding and competitive art industry.

SMCK: You are politically conscious, as both a woman and an artist. How would you describe the current mid-pandemic situation or evaluate its significance for art and politics?

Self portrait. Photo: C. Mitrentse CM: While most wars in history start in a storm of bluster, this war had started silently. The virus spread quickly, effortlessly. Soon, the subtle mutations were multiplying as enemy casualties filled hospitals, mortuaries, refrigerated hearse-trucks.
Since the outbreak of the coronavirus pandemic, the arts and culture sector has been experiencing a paradoxical situation globally. While demand for cultural and creative content intensified throughout the lockdown period - and digital access has become more critical than ever before - indicators predict that the cultural sector will be one of the most impacted, and probably one of the slowest to recover.

The economic situation of artists and non-profit intermediaries require urgent public assistance, especially in the long-run recovery process. Culture in times of crisis should be developed with concrete initiatives as the anti-weapon. Taking into account, though, that the CIA promoted abstract expressionism against the Soviets in the 1950s, abstract initiatives are potential tools too!


Order the digital or print version of Issue #04

THE PETRAS EXCAVATION IN CRETE

THE ICONOGRAPHY OF ORTHODOXY

THE LEADING POET OF THE GREEK DIASPORA

The art sector will be one of the slowest to recover

Does jewelry need to be spiritual? 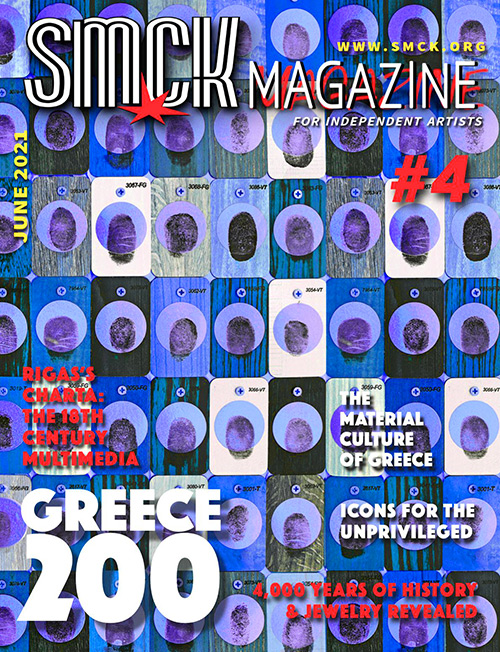 DIGITAL: If you wish to buy the digital version of SMCK Magazine (PDF, 58 pages, price: 5,80 Euro), please choose one of the payment options below: PayPal, credit card or direct bank transfer. You will receive the digital magazine by email within a few hours.