JEWELRY MAKES YOU A BETTER PERSON


It doesn't take much to shatter your entire worldview and preconceived notions of value and preciousness. For me, all it took was a simple request: could you do three simple wire rivets on a watch? Can I do three rivets? Are you serious? Several years ago, I had just completed graduate school and was quite sure I knew everything I needed to know about jewelry and metalsmithing. I didn't - and I still don't. I started my journey into the world of jewelry design and repair at a traditional jewelry store working as a polisher and slowly worked my way up to bench work. I still had a head full of hubris and a general disdain for ordinary or mass-market jewelry from big-name commercial designers lacking character and soul. So, when the sales associate returned to the shop with the client's sterling silver twisted-wire accented designer watch broken into three pieces and badly mangled and distorted, I was somewhat less than enthusiastic and empathetic. I wondered aloud why anyone would bother to have such an ordinary piece repaired, particularly one as severely damaged as this one, and that the client was better off just buying a new watch.

A broken watch can, sometimes, make you a better person

Have you ever said something based on a complete lack of context and information and instantly regretted it? I have. I was quickly informed that the clients was an older couple and that the watch had belonged to their deceased daughter, a victim of domestic violence. The attack that led to her tragic death also caused the damage to the watch, which was a gift from the parents to their daughter and one of the few items they had to remember her by. With this new information, and my mind awash with feelings of shame and regret for my attitude towards the watch just moments before, I proceeded with the repair. Without question, they were the three most difficult and challenging rivets I have ever had to make.

Close-up. Photo by Jason Stein With shaking hands and a cold sheen of sweat newly-formed on my face and neck, I realigned the warped and twisted links, opened up crushed hinge tubes, and cut new silver rivet pins. Riveting the wire pins securely was particularly difficult, as my hands and eyes seemed to have stopped communicating and working properly.
But in the end, the links were reattached and tightened. I polish-ed and cleaned the watch as best I could, however, there were still deep gouges and pits that remained in the silver, a visceral reminder and testament to the violence of the situation that had brought the piece to me. I could have polished it harder or filled in the scratches in the wounded metal, but I didn't want to. Somehow, erasing all evidence of the brutal tragedy seemed wrong. It would have been an insult to the memory of the person who wore the watch in life and who must now live on in the hearts and minds of those who remain and must carry on.
From that day on, I was less quick to judge or dismiss a piece of jewelry, as its true function is to signify connection, emotion, memory, and meaning, regardless of how it was made or where it came from. I think about this every time I pick up my riveting hammer and every time I make a rivet. I'm a better person and jeweler because of it, and for that I am grateful.

Jason Stein is a jeweler and metalsmith living and working in the United States. He received his BFA in Metal Design from the Rochester Institute of Technology in 2008 and his MFA from East Carolina University in 2010. He currently works full-time as a custom and bench jeweler and teaches jewelry and metalsmithing at Central Piedmont Community College in Charlotte, NC. His sculptural jewelry and objects deal with the concepts of control, failure, and chance in the creative studio process.

Order the digital or print version of Issue #03

WE LOOK FOR WAYS TO SUPPORT OUR MEMBERS

KLIMT02 on the positive changes of Covid-19

THE SKY IS THE LIMIT

THE ART OF MAKING JEWELRY INNOVATORS

Masieraad on the art of educating

Galerie Biró on how to make SCMUCK number one (again) 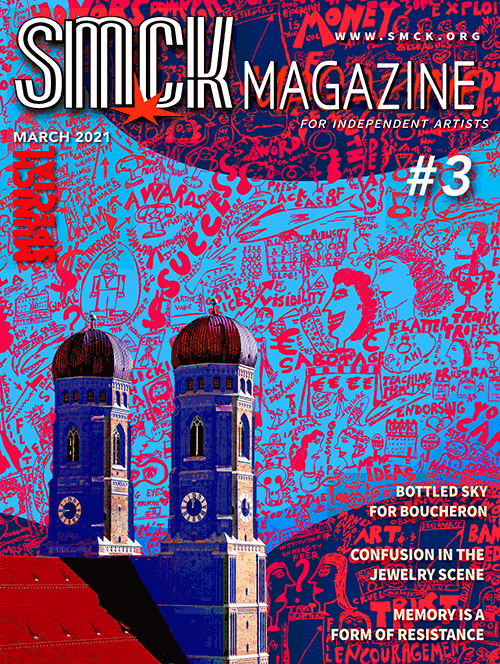 DIGITAL: If you wish to buy the digital version of SMCK Magazine (PDF, 58 pages, price: 4,70 Euro), please choose one of the payment options below: PayPal, credit card or direct bank transfer. You will receive the digital magazine by email within 2-3 hours.