DAVE JORDANO'S PHOTOGRAPHY DOCUMENTS THE DEINDUSTRIALIZATION OF DETROIT AND ITS CITIZENS' RESISTANCE TO THEIR CITY'S DOWNTURN.

Fine art photographer Dave Jordano has documented cultural and societal changes in the United States for more than twenty years. His photos of night-time Detroit speak volumes about the deindustrialization of a former bulwark of the US economy and the citizens' stubborn resistance to their city's downturn. Jordano's images are historical testament of the rise and fall of American manufacturing.

CZ: Why did you decide to leave your commercial photo studio and start photographing people and urban landscapes?

DJ: As a student studying photography in the 1970s in Detroit, all of my work at the time was documentary-based where I shot large format and 35mm projects in black and white. My influences at the time were Cartier-Bresson, Walker Evans, and Eugene Atget, among others. After graduating I moved to Chicago to pursue a career in commercial photography where I established a successful studio shooting major ad campaigns for many national and international clients. In the late 1990s, with the digital age emerging, I started scanning old negatives from my student days that completely convinced me that I needed to pick up where I had left off decades earlier and start making new projects again that were fine art/documentary-based with lasting implications.

CZ: All your photos tell stories about people, landscapes, urban and industrial zones. What draws you to document these, often commonplace, motifs?

DJ: I do tend to relegate projects towards areas that are lower on the economic scale as I find that these areas possess a truer, more inclusive view of the current economic climate of the American psyche, especially in areas like Detroit and other rust belt cities. There is no question that these avreas have been dealt some of the most devastating economic downturns, but I often sense a strong element of self-preservation and existence by the residents who live in these areas.
To be able to overcome this drawback is one of the reasons why I gravitate towards documenting what others might find mundane. There is always something worth discovering even in the most boring places.

CZ: In 2016, you started to photograph empty streets and buildings in your hometown, Detroit. The series A Detroit Nocturne transforms houses and places into ethereal monuments of urban history. What stories – or realities – do these images reflect?

DJ: When I completed my project Detroit: Unbroken Down, which documented the lives of various residents living in poverty-stricken areas, I began concentrating on documenting the city at night, photographing structures that were in many ways supportive of maintaining the economic and social underpinnings of the neighborhoods that were struggling. The streets were empty, but the lack of people does not mean that I wasn't aware of their presence. The photographs represent a visual document that speaks to the quiet determination of its residents, both independent shop operators and homeowners, who have survived the long and difficult path of living in a post-industrial city stripped of economic prosperity and opportunity. The fact that these buildings have remained occupied out of the thousands that have been abandoned and torn down bears witness to the tenacity of Detroit's residents who are trying desperately to hold on to what is left of the social and economic fabric of the city. They are after all the physical evidence of where they have carved out their collective ambitions and lived out their dreams.

Amy, Detroit 2013. Photo: Dave Jordano. CZ: Do you think that there is a way out toward 'a better future' for this urban-industrial region?

DJ: Bringing jobs and manufacturing back is key to reversing the decline of the area. I don't see it as political as much as it is corporations shunning their social responsibility by putting profits ahead of families. Perhaps a socialist instead of a capitalist culture might have prevented such a catastrophe from happening.

CZ: Can photography as a "realistic" art medium help to better understand social and political disparities?

DJ: Photography is a great teaching tool but it's more of a historical land-marker than it is a method of creating change. It helps you to understand the seriousness of events as they unfold, but rarely has it prevented the same thing from happening twice, or three, or more times. Plenty of examples illustrate this if you look at all the wars, poverty, racial disparity, famine, and social unrest that have been documented thousands of times, but these atrocities still happen. Photography can document what's wrong, but it's up individuals to make the changes. As a photographer I see myself more as a social documentarian who melds together specific projects or points of view that carry themes that relate to each other.

FREELANCERS ARE ONLY AS GOOD AS THE LAST JOB THEY DID

CZ: What restrictions – and what freedoms – did you experience in your work in the advertising industry?

DJ: The best freedom was owning my own studio and not working for anyone else. Being an independent freelance talent is both rewarding and nerve-wracking since you never know when your next assignment will be, but I was fortunate to have a long and productive career that lasted over 30 years. I worked with wonderful clients and the best creative advertising agencies at the time. I specialized in food and product photography throughout my career and built a reputation as one of the top photographers in Chicago and the country. There really is no better freedom than being self-employed and charting your own career.

Cherries, Self Promotion Poster, 1978. Photo: D. Jordano. Restrictions though were a constant part of the process since I always worked with an art director who had conceived the original idea, had an approved layout that was specific to his client's needs, and hiring me to bring it all to fruition. Whether it be for an ad for a tennis racket, a cordless drill, a ham sandwich, a bowl of soup, or a pair of shoes, my creativity was focused on my client's needs and clients were coming to me because I could elevate the status of their product with my creative vision. Advertising is a collaborative effort on both sides of the creative process, those who created the original idea and those hired to execute the concept. Not only did I have to please myself, but also everyone else who was involved in the creation of the work. As they say in the business, "You're only as good as the last job you did" – [and this] rang true in every respect.

Order the digital or print version of Issue #07

EDITORIAL: OF WAR AND PEACE

Fairs that fail to respond to the challenges born on 24 February 2022, are destined to become meaningless.

WHY DOESN'T CONTEMPORARY JEWELRY TAKE OFF?

While the art market is flourishing, the market for contemporary jewelry is held back.

Grassimesse should no longer be the industry's best kept secret!

THE DIAMOND STORY FROM A TO Z

DIVA museum for diamonds, jewelry, and silver explains its mission to preserve and promote Antwerp's most important industry and cultural heritage. 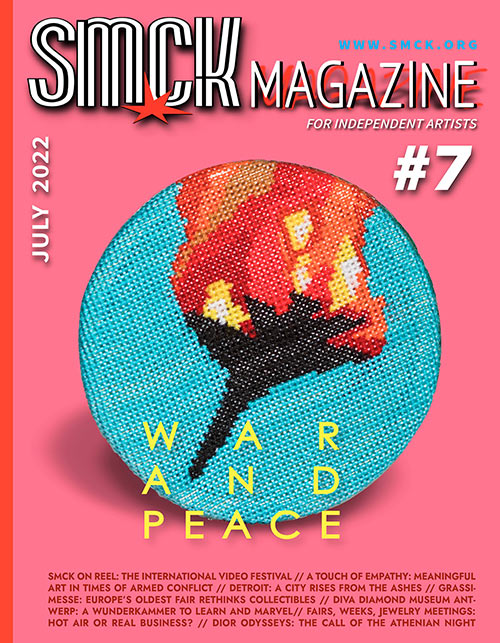 DIGITAL: If you wish to buy the digital version of SMCK Magazine (PDF, 94 pages, price: 6,40 Euro), please choose one of the payment options below: PayPal, credit card or direct bank transfer. You will receive the digital magazine by email within a few hours.