A CARICATURE OF THE ART WORLD

Skateboarding is widely considered a "loud" sport practiced by young individualists. Invented by surfers in California in the 1960s, it first became popular through slalom competitions. The discovery of empty swimming pools and rough urban terrain for the sport turned skateboarding into a real movement. Since 2020, it has been an Olympic discipline.

Apart from the extreme commercialization skateboarding witnessed, it also became a synonym for punk rock, hip hop, and street- and lifestyle culture, and in this way has penetrated the art field more and more. Despite the rise of the skateboarding industries, many skateboard manufacturers still see added value for themselves in the "personalization" and the manufacture of small series instead of mass production.

In Dogtown and X-Games, Velten Schäfer analyzes the history and development of a movement that is "sport" and "art" at the same time. Christoph Ziegler—a skater himself in his youth—talks with Velten Schäfer about the transition from skateboarding to art.

CZ:  What makes skateboarding different from other sports movements?

Frontside Ollie by Velten Schäfer. Photo: Joker VS:  Skaters always claim an artistic subjectivity for themselves, based on the assumption that the act of skateboarding is a means of expression and comes from the soul, etc.
Indeed, a skate performance is something completely different from ski slalom or javelin: the movements follow aesthetic parameters and not the logic of stopwatch or meter.

In his classic book From Ritual to Record, Allen Guttmann shows how modern sport has been rationalized, disciplined, and removed from the cultic context that—by concept—the ancient Olympic Games expressed.

According to my thesis, skateboarding, as a paradigmatic "postmodern" sport, moves back from record to ritual: it's about the ability to do tricks, but mainly the ritual is performed through a loyalty to style, or, in other words, through the authentic physical enactment of an aesthetical scheme.
This is where the creativity begins: skateboarding is largely about adapting, combining, and inventing new movements, not about perfecting existing ones.

CZ:  You mentioned the "artistic claim" as being part of skateboarding. How did this claim come about?

VS:  In the 1960s, the early years of skateboarding, slalom and figure skating were the most popular disciplines, with measurement categories that were adapted from conventional sport competitions. The rupture took place in the late 1970s, when some young athletes in California started to skate "vertical" in the now legendary swimming pools. The edgy—and dangerous—movements in the steep-sided empty pools can be characterized by a kinesthetic proximity to punk/hardcore music.
Riding on "unsuitable" terrain can physically be compared to slam dancing: you throw around your body, it's a radical game of losing control. The cultural link between music and sport is based on this loss of control.

Many skaters also play in bands—if you look, you can find a "Skate Rock" section in any music store. Skateboarding later adopted hip hop music, since it perfectly corresponded to new maneuvers, complex board flips, and body twists. Sport and art now start to approach each other; the skater also becomes the designer. Street art is the starting point: skaters started to design their own board graphics and their accessories.

CZ:  Besides a growing tendency toward commercialization, skateboarding has entered the art world. How did this happen?

VS:  An important factor is the nexus between images and bodies. The "team riders" of the large skate brands are not primarily expected to win medals, but rather to embody the marketing aesthetics of the specific brand, which becomes explicit through the board and clothing designs.
Tony Hawk, one of the most famous skateboard stars, noticed in the 1980s that certain styles of physical moves related to certain brands. In order to make a difference through their graphical style, many skate brands have developed a huge appetite for refined designs, with which they also expand into fashion.

With the categories "high" and "low" shifting in the art world, skateboarding has started to enter galleries and museums. In 2000, Luxembourg artist Michel Majerus built a mini ramp in the Koelnischer Kunstervein gallery, Germany. In 2002, the SIMPARCH collective installed a skate bowl at the international art exhibition Documenta in Kassel, Germany, which was open to the public and frequently used by well known "skate heroes."
"Mini ramps" or skate performances have increasingly become part of exhibitions and art festivals. Parallel with street art, the styles of skate graphics have experienced a "gallerisation."
In a complementary manner, the skate-graphic market has started to adapt subjects and stylistic strategies from art.

VS:  Maybe skateboarding is a caricature of the art world. Both fields—art and skating—are shaped by the idea of authenticity, and ultimately by the concept of the "genius." The skater who can expose his aesthetic-sportive practice as an undisguised expression of the conflict between himself and the (urban) environment is considered original, has a signature, is considered authentic and, in colloquial terms, is a "brand."
Skateboarding reveals the fabrication of the "real" in the moment when "originality" unfolds in a product-aesthetic form. And this aesthetic also has a certain gender…

CZ:  ... namely the male. How do you see the tendency of this "postmodern" sport in terms of gender? Can skateboarding still be rebellious in this direction?

Berlin Skatepark, 2012. Photo: Dunja Stamer VS:  The "culturalization" of skateboarding was actually a masculinization. Before the era of Dogtown (read the book!) it was far less male. Roughly speaking, skateboarding is more gender-inclusive the closer it gets to the sports field: when it takes place on "legal" terrain rather than areas "stolen from the city."
Certain regulations also curtail the male "right of the loudest." Skateboarding qualified for the Olympic Games as the result of a standardization of movements on a standardized terrain, and this is manifested through the highly artificial parcours and the optimized "street furniture."
However, the saga of the independence and freedom that is still strongly associated with skateboarding may change with its "sportification." Perhaps especially if social circumstances change. The future is still open, surprising, and can be shaped—that's my conclusion in Dogtown.

Dr. Phil. Eckehart Velten Schäfer teaches sports sociology at the European Sports Academy Potsdam and works as an editor for the legendary German left-wing newspaper Neues Deutschland. He's a passionate skateboarder and lives in Berlin. His book Dogtown and X-Games: The Real History of Skateboarding has recently been published by transcript Verlag.

Order the digital or print version of Issue #01

A MENTAL SHIFT HAS TO TAKE PLACE

JEWELLERY FOR THE BODYLESS

MOEBLING: THE SIDE EFFECTS OF DOMESTICATION

MEDIA ARE FOR MANY CHOREOGRAPHERS A STANDARD ELEMENT OF THEIR PERFORMANCE 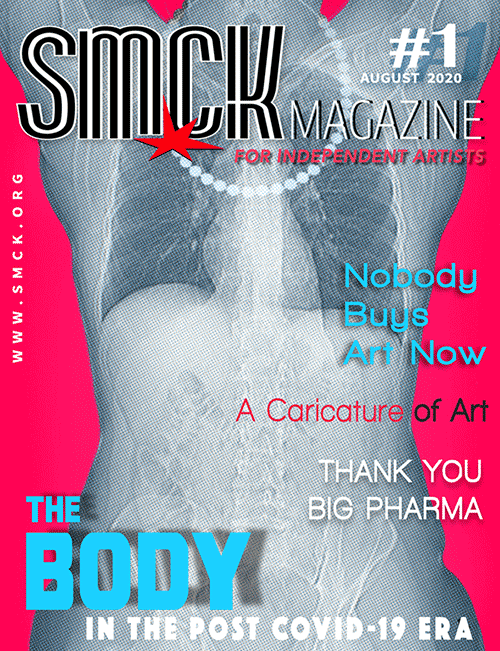 DIGITAL: If you wish to buy the digital version of SMCK Magazine (PDF, 42 pages, price: 3,20 Euro), please choose one of the payment options below: PayPal, credit card or direct bank transfer. You will receive the digital magazine by email within 2-3 hours.